We woke and did some much needed laundry. Went to the market for groceries, and Johnboy picked up ingredients to make our local host at Cafe Den Eik some real American Chili. Before we knew it, it was once again time to change strings and get ready for the trip to this evening’s show at Cafe Den Bromfiets (somewhere near Horentals, Be). Peter was assigned to be our driver and sound man these remaining days. We hadn’t had the opportunity to hang out much with Peter and in the coming days would discover that he was as unique, hard-working, funny, and intelligent as the rest of the crew.

After delivering John’s homemade chili to Chris and walking around town to see the sights and catch a few football (soccer) games, but it was soon time, once again, to hit the road. We arrived at the Cafe and chose to try the same single-mic setup. The lack of tables and chairs in front of the stage should have given us the clue that this house and audience would be different than the previous night. But not many people were in the place when we showed, and with a quick comment about maybe everyone will show up at the last minute, we decided to set up the single-mic. It proved to be a mixed-blessing. As we ate dinner and prepared to begin, people began pouring into the place until it had gone from empty to bustling in the course of a half-hour. We played our first set and everyone enjoyed the energy of our music, but we were told “it’s a shame, we can’t hear this good music”.  No problem.. 😉  we took a quick break and plugged in to play loud. The audience responded with enthusiasm for the music and we finished the night with hooting-hollering crowd. Peter was very patient with us for our sound issues and was integral to getting the night on track.

The next night we played closer to the band house at Cafe William Tell in Saint Lenaerts. Since this was a blues club, there were no doubts what kind of show we must put on. We took time and dialed in a good sound. And after a meal of fresh soup, bread, and cold-cuts, we did our thing up on the stage without reservation. At the end of the show, and being close to the band house, we stayed and played on the floor among the audience, even filling some requests. It was a good night.

Our last day of the Belgian leg of the tour was to be a long one. We prepared by staying up a little too late and getting up a little too early. This being our last day before leaving for Germany, we cleaned the band house and organized our gear. Peter picked us up at noon and we were off to Brussels for a street festival. Soon we were set up and playing for a sparse crowd (rainy weather). After a few songs, a crowd had congregated in the rain to listen. Hank’s brother and friend who’d been traveling Belgium and were in Brussels also showed up. It was an energetic show, enhanced by our friends “The Wanderer” and his wife who’d driven across the country to come to the Schaarbeek area of Brussels and dance in the streets. They also brought us gifts of photos and Belgian chocolate. Having met our required time, wanting to stay and play a little extra, but being met with a downpour that began flooding the street and soaking the attentive audience, and having another show to play that evening, we decided to call it quits. We sold merchandise, met the local mayor and others dignitaries, and packed up in the rain and were soon on our way to Cafe Bacchus in Geel.

Cafe Bacchus, Geel, Belgium. Our last show. It was a good one. We played well, and we were again well-received. Nick and Analore arrived from Waardamme to hear this last show. The place had its own sound, so Peter could quit worrying about sound and focus on driving us home safely after the show. We got back to Gierle with some “unwind” time to spare, and with Hank’s brother and Nick and Analore visiting town for the night, probably went to bed too late to be prepared for what was in store for the band in the coming day. The next day, we had agreed to participate with “Stijn the Man” in a local street festival, the “Krugentocht”. Sure, we would be dressing up, performing music, and playing games like the other teams in attendance. But we had completed playing the paying gigs, so how tough a day could it be? 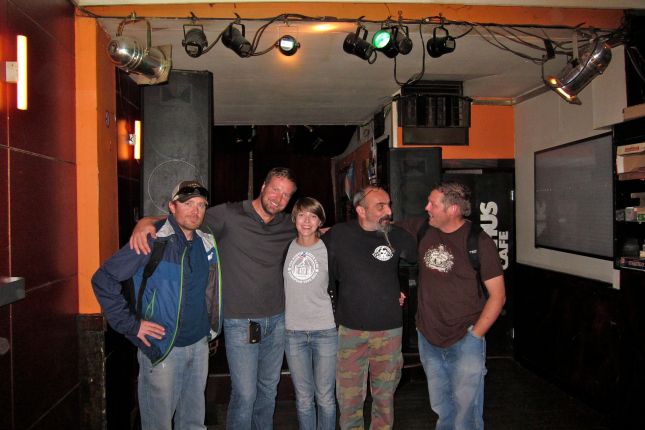 @ Bacchus Cafè, Geel BE with Julie and Peter "The Juiceman". Should be called the "Gooseman", 'cuz he got Hank good:)

Posted by therubberknifegang on September 15, 2011 in Uncategorized